We have had a lovely day celebrating Christmas with friends at home.
Looking back on the day, my overwhelming feeling is of gratitude -
grateful that we have such a lovely roof over our heads, grateful for
the delicious food we had, grateful to have such beautiful friends
to share the day with, and grateful to my
colleagues who worked today so that those of us with
younger children could spend time at home.
Merry Christmas! 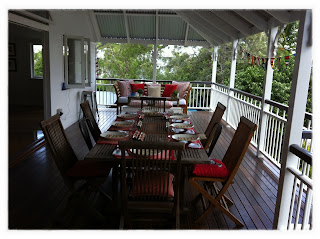 the verandah neat and tidy before the guests arrive 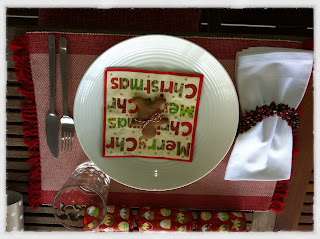 Place settings - upside down as I can't rotate the
photo :( 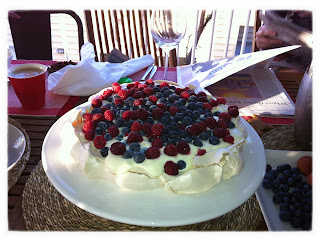 pavlova - was gone in 60 seconds - the kids
inhaled it 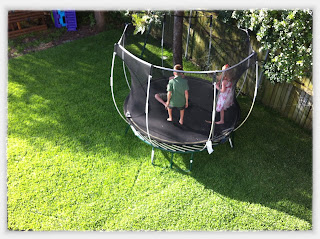 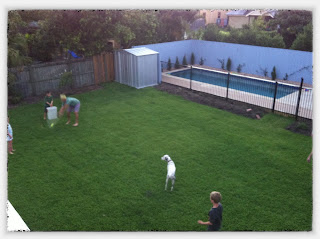 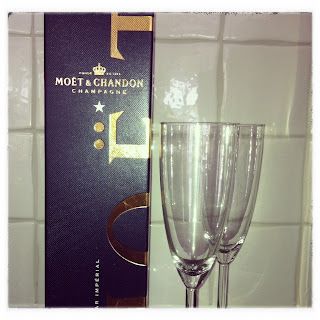 A nice end to a lovely day. Our lovely builder gave us
this bottle of champagne at handover and we wanted to
wait for a moment that felt right to open it.
The first Christmas of hopefully many felt like
the right time :)
F x
Posted by Fiona at 9:14 PM 1 comment:

When I was growing up in the UK and Germany, Christmas was always a big deal. A
large part of that, especially in Germany in the lead up to Christmas, was the food.
On the 4 Sundays leading up to Christmas we would have coffee, cake and Christmas biscuits,
and light a candle for advent. My mum always had a wreath made of real fir trees especially
for this purpose - there were four deep red candles, and to this day the smell of fir trees
transports me back to that time.
I have tried to continue the tradition of Christmas baking in the lead up to the
festive season. Usually I bake for my son's class so that each child gets a little gingerbread man -
I had to let that go this year as we were getting ready to move house in the last
week of term - so supermarket bought candy canes it was. But I have been revelling
in the new kitchen and have enjoyed baking with the boy of the house for friends and colleagues.
I always think there is something a bit special about making something yourself - it's like
lovingly cooking a meal for friends. It was a nice way to spend a few hours with the boy
of the house, without it involving trampoline or pool action.... 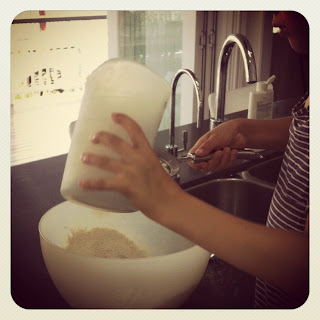 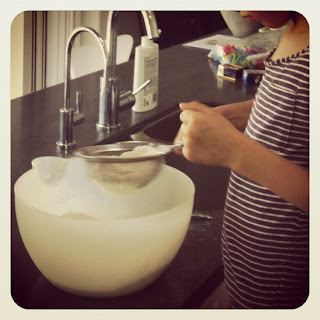 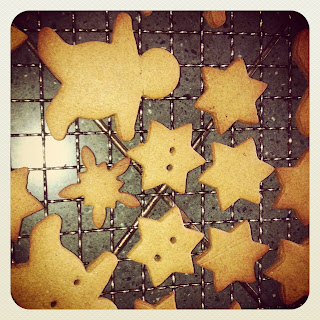 some spice biscuits just out of the oven 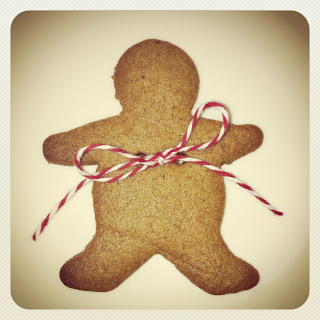 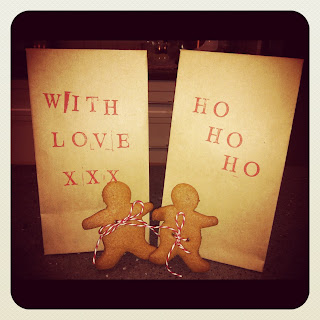 two of my parcels with biscuits ready to be distributed
This year I have added a new recipe to my Christmas baking - shortbread with cinnamon.
Being half Scottish I was deeply sceptical about any messing about with
shortbread - why meddle with something so perfect - but Mum assured me that
it was fabulous. She is right. Recipe follows.
Cinnamon shortbread
225 gm butter, softened
75 gm caster sugar
225 gm plain flour
50 gm cornflour
1 tsp cinnamon (I often use more than this)
Beat the butter and sugar together, though not so much that they are fluffy.
In a separate bowl combine the flour, cornflour and cinnamon, then
add them to the butter/sugar mixture.
Press the mixture into a 23 cm shallow square cake tin and smooth the
surface with the back of a wet spoon. Prick all over with a
fork then chill for 20 minutes.
Preheat oven to 170 (150 fan forced) and bake for 55 min or until
pale golden. Remove from oven, cut into fingers
and sprinkle with golden caster sugar ( I usually don't sprinkle).
Leave to cool for 15 min in tin then finish cooling on rack.
Enjoy !
Posted by Fiona at 11:31 PM 1 comment:

the art of carpentry

I love all the timber that is integral to the Queenslanders. It was inspiring to see the extension of our old girl take shape, and how the quintessential features like breezeways and archways help to make the new blend with the old. Wood must be such a wonderful medium to work with - I love the smell of new timber, and I think seeing something come together as you create it would be very satisfying. I love my current job but it has no real scope for creativity, and in idle moments when I daydream of alternate careers, I often think about carpentry. I would be hopeless of course, I am fairly clumsy (understatement if you ask my Dad) and would very quickly lose a thumb or an eye. But it's nice to dream ..... 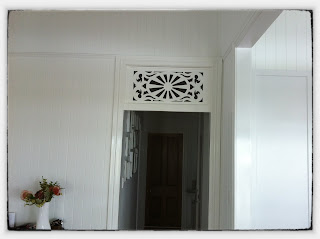 breezeway in the hall - apparently they were designed
to promote air flow into rooms and to keep cool. I just think
they look beautiful 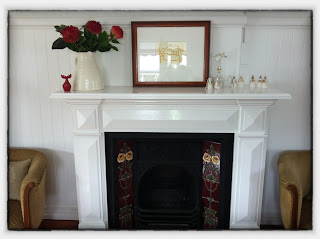 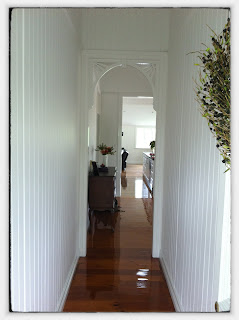 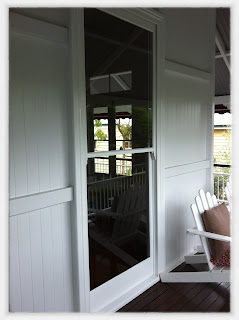 double hung windows at the front of the house 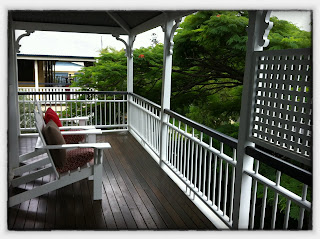 our builders made all the verandah railings by hand - it
was amazing to watch. Though they did tell me at the end
that it was their least favourite part of the project
as it was very labour intensive
Posted by Fiona at 4:59 PM 1 comment:

One of the nicest things about being back in our house is actually being back in the
street with all of our great neighbours. There is a lovely community feeling, and
most of the men exercise together at ridiculously early times of the day.
I didn't realise how much I had missed it until we were back here.
We decided to have our closest neighbours in the street over for
drinks over the weekend. We had my new favourite drink - mojitos - mixed
by the family affectionately known as the Spaniards - they have lots of stamina and
scoff at the Queensland habit of being asleep before midnight. Needless to say
there were a few sore heads the next day. 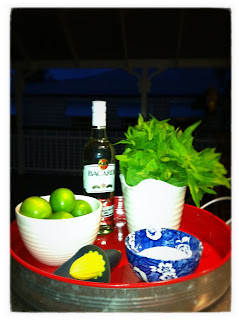 they must be good for you with all that
fresh mint and lime juice
I have been back at work this week and the boys have been hard at work in the garden, starting the big job of landscaping. 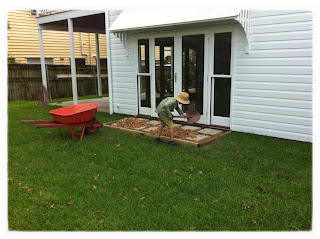 boy of the house helping with the landscaping. I had a warm maternal glow
driving off to work thinking how good it was that he was helping the man of the house.
Apparently not 5 minutes later the novelty wore off ...... 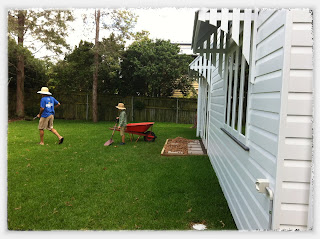 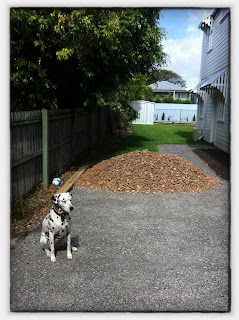 spotted dog of course had to be in the photo! The driveway had
been cleared when I got home after work, with some pebbles
used around the pool and some around some paving
in the back garden.
Posted by Fiona at 12:28 AM 4 comments:

It has been a long week. We are still unpacking boxes but at least we have moved everything back to the house. I almost feel guilty typing this as there is so much still to do, but none of it is going anywhere. I feel as if I will be going back to work next week for a well earned rest.
Some things I learned this week about moving house: 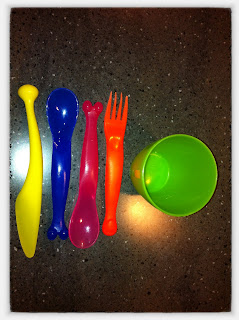 The house itself is wonderful, though we are still pinching ourselves that we actually live here now. Once we have unpacked everything, the really fun part will begin for me - finding a home for all of our furniture, paintings and photos. Most of the house is still a series of rooms with boxes, but I thought I would put up some shots of the verandah to start with. 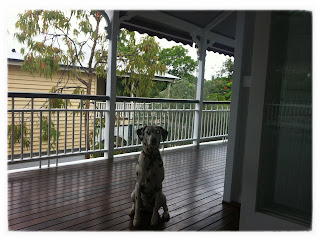 Spotty dog previously had the run of the house. I am sure I will relent,
but at the moment she is staying outside - mainly because she sheds so
much hair. We'll see how long that lasts, but she looks aggrieved. 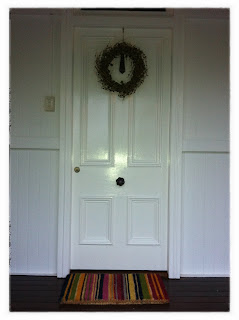 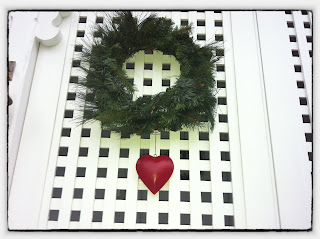 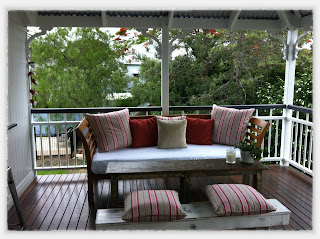 the verandah outside the kitchen/living area. All the furniture is
second hand, mostly from the WAC. It looks so neat I feel I should
add a disclaimer*
* photo is for illustrative purposes only and bears no resemblance to
the way it looks 99% of the time 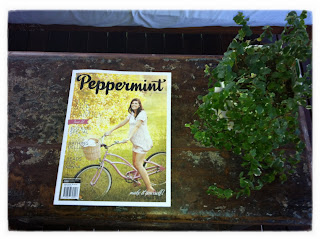 I discovered this magazine today and while as yet I haven't had the chance
to sit down and read it, I am looking forward to some down time this weekend
to savour it. I hadn't seen it before, but with a focus on recycling,
sustainability and making things by hand, I think I'll love it.
It also mentions my clever friend Tammy :)
I'm looking forward to the weekend - hope everyone has a good one.
Posted by Fiona at 11:48 PM 1 comment: