I think most renovators have one particular area of their home that is most meaningful for them. For us it is the kitchen - we spend a lot of time there, cooking and just hanging out. The man of the house and I both love cooking. Our previous kitchen was tiny with minimal bench space and almost non existent storage space - but we loved it. It opened onto our verandah via bi-fold doors, opening up the space, letting the outside in, and ensuring that you always had company in the kitchen while cooking. Given the Queensland climate, most of our meals were eaten on a table just outside of the kitchen on the deck.
We wanted to incorporate some of the features that we loved about the old kitchen, while giving ourselves more space and modernising the look. This new kitchen is in a completely new space in the house which gave us a bit of freedom, but we also didn't want it to be too big. Of course budget came into it as well.
We were able to retain the idea of the bi-fold doors. The actual footprint of the kitchen is not large, but we will usually have these doors open when we are at home to open up the space. 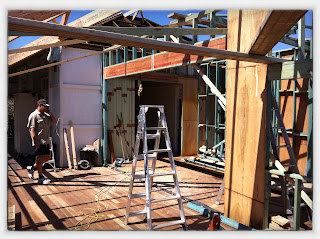 the future kitchen space viewed from the "new" verandah,
with the space for the bi-fold doors 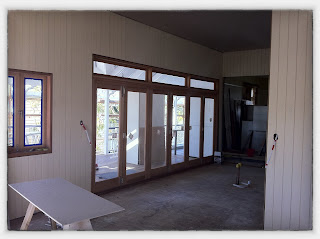 bi-fold doors completed and seen from inside
the house 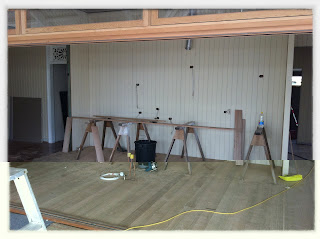 bi-fold doors open and the kitchen starting to take shape
It was at this stage that we left to go overseas - not without some trepidation as there would be some major changes while we were away, and for a control freak planner like me this was challenging...... however we needn't have worried as it is all taking shape beautifully: 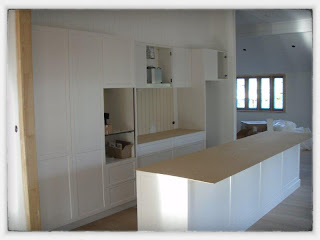 the bi-fold doors are to the right of this picture.
the benchtop is still to be installed. 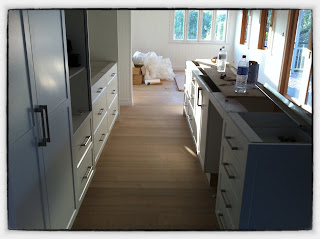 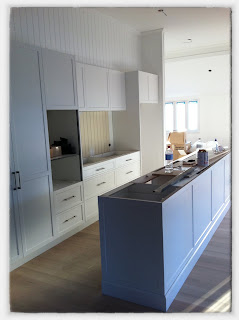 We have lots more bench space and an island bench which was high on our wish list - it will be great to have some stools there and to be able to eat/chat/supervise homework/drink wine :-). The lovely Queenslander we are renting at the moment has a similar set up and we spend a lot of time there.
We decided on Corian as a benchtop rather than Caesarstone - Caesarstone is beautiful but I was worried when I heard that it is harder to fix if it chips - knowing that we have an exuberant boy in the house I wanted something more durable. We have chosen a greyish colour called Lava Rock and the cabinets are painted in Dulux Lexicon.
Rather than a large freestanding oven we chose a Neff wall oven - there are only three of us and since space was at a premium and we didn't feel we needed more oven space. The pantry is huge with shelves and drawers - I didn't take a photo of it but will post one soon.
So much has changed in the rest of the house since we were away - it makes it all much more real and our target of being back in the house before Christmas seems possible. Can't wait for the festive season to start entertaining :-)
Posted by Fiona at 1:48 AM 1 comment:

We have just returned from three weeks in Europe to visit family.
I had forgotten how much I love autumn - not a season we see much of here in Brisbane - there is of course a welcomed drop in the temperature and the humidity of summer, but none of the things that I associated with autumn as I was growing up: the rustling of leaves underfoot, the crisp coldness of the early morning air, the leaves and foliage changing colour, gathering conkers, and the roast chestnuts for sale. I loved it all.
We spent most of our time in southern Germany, and also some time in Spain. Probably because we are renovating I noticed a lot about the architecture over there, and also how house/garden proud people are. Once I have sorted out my photos I will post some on here but in the meantime these are a few from my phone taken in Munich. 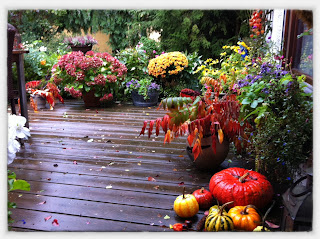 the back deck in my Mum's house 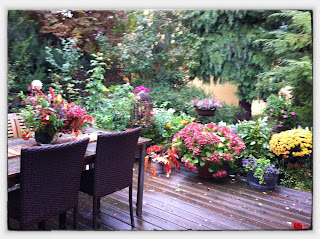 another view of the deck 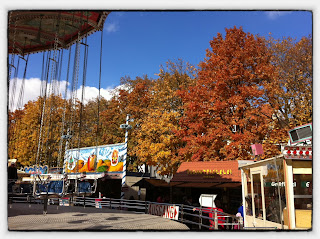 trees changing colour in Munich at a fair we went to 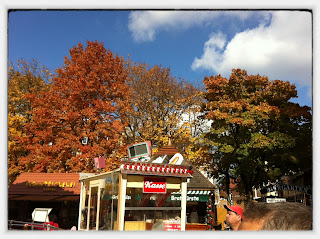 more trees......
We got back yesterday and went round to have a look at the house this afternoon.
Lots of changes - kitchen almost in, tiling starting in the bathrooms. I will update soon.
Posted by Fiona at 10:57 PM No comments:

It has been a lot of fun looking for new furniture to fill all of the space that
we will have once the house is finished. One of the wonderful discoveries that
I have made is the Wooloongabba Antique Centre. Lots of unique stores with
vintage treasures. I am always delighted when I find a home for something
there, and love the idea that in some way I am recycling rather than
buying something flatpacked that will only last a few years.

It has become my new favourite place to browse and pretend to be cool :) 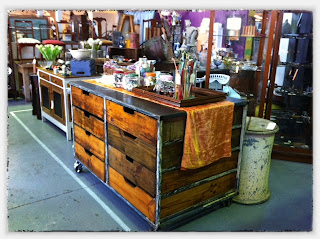 i admired this for a few weeks and when
i finally returned to buy it, it had gone 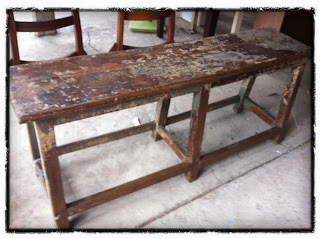 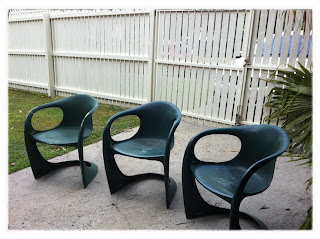 all the greys and whites of the rainbow

Choosing the external paint colours is one of those things that you should take some time over.
It is an expensive exercise and if you don't like the end result you will have to live with it for a long time.
There are many houses I have admired over the years in our suburb - I have photographed a few below but on a cloudy day so none of them look as lovely as they do in real life: 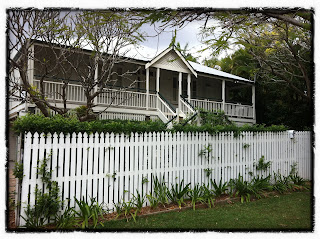 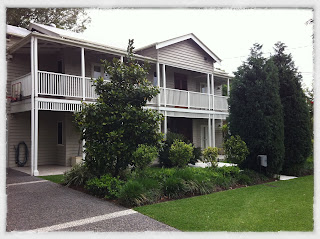 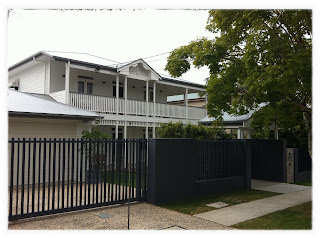 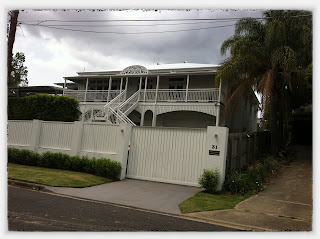 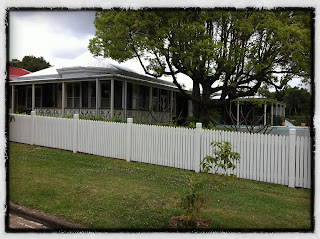 Some of the features that they all have are neutral colours and symmetry. I wanted to retain the symmetry in our house by maintaining the verandah on three sides. I also predictably wanted to keep the house white, but when it was painted as part of the "first" renovation the trimmings (gutters and verandah balustrades) were a dark heritage green. I wanted to update this colour scheme a little by having grey tones.
Again I had good intentions but quickly became overwhelmed by the enormity of choice available. In the end I selected four colours, painted them on a large piece of timber and decided that they looked fine. The exterior painting is still a work in progress but it's almost finished. 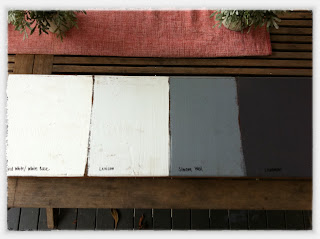 We ended up choosing Lexicon Quarter for the windows and verandah railings, Lexicon for the exterior walls, Simone Weil for some of the battens, and Leadman for the gutters and balustrades. All are Dulux colours. 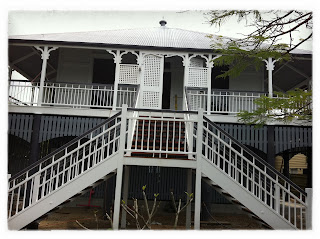 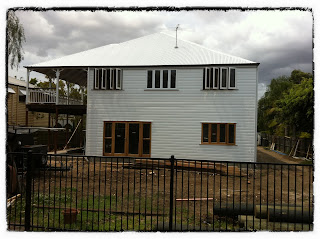 windows and French doors downstairs still to be painted 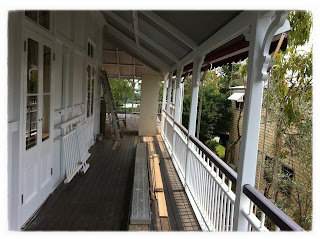 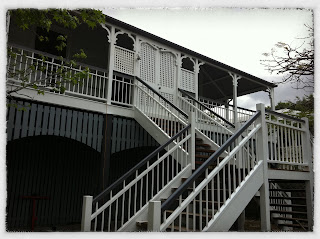